Receive a special meditation when you sign up for periodic heart healing treats delivered to your inbox:

I Know Your Heart Is Hurting.

I’ve been there. I’ve known the grieving that has your entire body heaving with sobs that leave you wondering if you will ever be able to breathe, much less feel true happiness again. Unthinkable loss where the ocean of whys are never satisfied, and it’s hard to imagine how you will ever come back from this. Yet you know you must.

In 2016 I lost my former fiancé to suicide. He died with his shoes on, new brown elevator loafers he’d purchased the month before along with the nice new suit that was hanging in his wardrobe. As I sat for an hour with his body and his blood tears his shoes kept drawing my attention. He always hated having shoes on the bed. The rifle in his lap was another mystery to me. He hated guns, and I never dreamed he would own one. Hours later his mother and I discovered the rifle receipt from that morning. He left a few dishes in the sink to wash along with a pile of laundered t-shirts to choose from crumpled up on the couch next to the pile of little mementos.

Those hours changed everything.

To get me through the first days, weeks, months, even years, I decided every single day that this experience would not destroy my life. Yet everything I believed my life was becoming would no longer be.  I refused to take time off from work, so I could keep my mind occupied and maintain some sense of normalcy. I saw an amazing therapist for two months who helped me get to a place where I could say what happened without getting hysterical. Then I found a therapist closer to home who wasn’t quite as helpful.

At four months I was perusing the internet dating sites to prove I could push myself to move on. I found myself on two dreadful dates and then a one night stand with a cute little man sporting a round beard that reminded me of Ewoks. All it proved was how disconnected, broken, and betrayed I truly felt inside. I saw the empty lovemaking was taking me deeper into despair instead of helping me feel better. The glorious bubble of denial started to perforate and I felt defeated and deflated.

I lived in that brokenness and still found my way through to the truth of the heart’s underlying wholeness. It’s ok if right now you don’t feel like wholeness can happen. I didn’t. I just knew I didn’t want to hurt anymore.

You are not alone.

I remember feeling isolated among my friends and family who wanted to help me but could never really understand what I was going through. Support groups were a hit or miss depending on how much shame and guilt I was carrying that day. Over and over I would hear different stories of “If I’d only known, then maybe I could have stopped it.” I will never forget the release when I finally responded that I did know, that I did my best to keep him alive, and then he still died anyway.

I had to realize my feelings were not an imposition. Expressing my shame went a very long way towards forgiving myself and letting it go.

Your choice is more powerful than the pain.

After the low of the Ewok frolic I made a renewed choice to heal my heart. The more I released guilt and shame, the more I was able to access and process my feelings. This is when my Trauma surfaced. 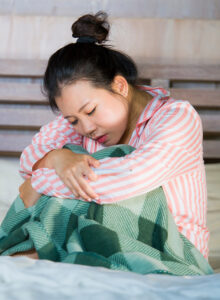 There were times when the only place I felt safe was in my own bed, and even that safety was a tentative one. I felt haunted by the places we used to go and so terrified of running into his friends that I completely avoided his side of town. Every beautiful memory became distorted by the pain. I looked for art and activities to take as hobbies and grasped for joy through unopened Amazon deliveries. As hard as I tried, there was no magic package that could deliver my heart back to me.

The post-traumatic stress was a strain on my nervous system. I felt frazzled every time someone I love was out of sight for too long, so I would go looking expecting to find them sprawled out on the floor. The constant concern made it difficult to care for myself at times.

The first step in moving beyond the pain is deciding that you can and you will.

Your life can be full of love again.

Over the next few years I continued to release guilt, shame, heartache, anger, sadness, fear, and a million other emotions. I was building myself up, healing, and chipping away at that glorious bubble of denial that kept me numb enough to hold down a job, pay the bills, and generally cover the basics of survival while I healed. Then came Mardi Gras in 2019. 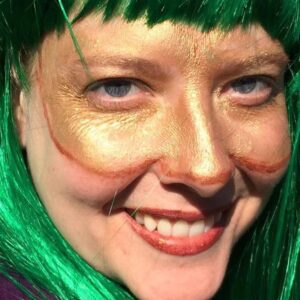 Mardi Gras in New Orleans is a magical season. The energy of the city is electrified. Of course nudity, inebriation, and debauchery abound, but so do magnificent jubilee, beautiful colors, dancing in the streets, glitter in every crevice, and any form of celebration and joie de vivre you could possibly imagine. That year my cousin came to visit for the festivities along with his friends from Austin. I decided to give myself permission to enjoy the fanfare.

One of his artist friends was living in New Orleans who has a particular gift for touching people right in the heart. All of a sudden I could feel things again. I could tingle. I could feel the electric shock from an accidental brush of the fingertips. I knew I was still alive inside and that I could love again. And he was single! Of course by the time I got the nerve to reach out he was dating some other Jenny. So the universe sent a man to ignite the spark in me only to deliver him to someone else with my name. Mission accomplished, and my heart was suddenly open to new possibilities in a whole new way.

Before Mardi Gras ended he pointed to the New Orleans Healing Center and said there was an awesome yoga studio there. I took the hint and discovered the healing beauty of yoga.

Your challenges can become doorways for new opportunities.

The height of my Trauma came a few months after Mardi Gras. The worst episode had me seeing gunshots in the flashing light of the fire detector in my bedroom. My safest sanctuary was invaded. I experienced a level of paranoia that had me afraid to eat or drink the wrong thing. I managed to make myself a vegetable soup that kept me from dying, but I became dehydrated and disoriented. I remember looking at two jars of herbal tea believing that one would save me and the other would poison me, and I could choose to live or choose to die. I chose to live, but I didn’t know which tea was which. So on that hot summer day in June I went in my thick fuzzy Christmas pajamas to the yoga studio asking for the help of a shaman. It was trippy in the most frightening of ways, and I was incredibly blessed that my new art therapist showed up for class and decided to help contact my family and talk to the emergency responders for me.

The episode ended with me in the Emergency Room. As I sat in the hospital bed with IV liquids dripping into me I regained my mind. I was relieved to be myself again. Yet it felt like there was no further floor left to fall out from under me. I made the only choice that was tenable. I decided to completely devote myself to healing. I made a vow to myself that I would heal this entirely and find a way to live my life helping people in ways that served my soul.

What the heart desires, the divine provides.

Within a month I learned about a new 12-week private trauma healing program run by a ranking officer in the military and decided to sign up. I was ready, and the program worked. I never had another PTSD episode again, and I was able to be at peace with my traumatic experience of the suicide. 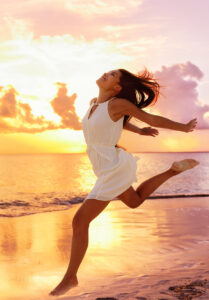 Two months after that I started yoga teacher training to become an instructor. The experience opened me up and bathed my heart in healing tears. I learned that love could be the teacher instead of pain. Where I once felt the heaving of sorrow and inability to breathe, my body began to feel pleasure and delight in giving myself loving attention. In meditation I was able to create a safe and loving sanctuary within myself to process everything that arises.  In the course of learning to heal myself I learned how to share the art of healing with others.

A year later I had my new mission to heal my heart with unconditional love. I was a certified yoga instructor, and I could suddenly see a life where I could help other people heal their hearts with unconditional love too. I started to explore romantic love again, and my happy life – even through the challenges –  continues to unfold before me.

I can help you in ways that truly work.

I know because I’ve lived through it.  I can feel real happiness in the big beautiful moments and also in the small quiet ones that used to haunt me. I can look back on my past and feel the love I learned and will forever carry forward as well as the lessons I learned to never repeat again. I am living the healing and building more joy into my life every single day with all of the tools I will share with you. And I can walk you through your pain into your feeling of true happiness again too. I can guide you, holding a safe and loving space for you while you learn to heal your heart and love every part of you without condition. The healing is yours to do, and I can show you how.

The power is all in your hands.

Are you ready to take your life back?

“Be relentless in your looking,
because you are the one you seek.”
-Rumi.